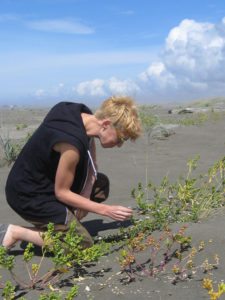 Kay majored in biology and anthropology at the University of Toronto. She started her PhD on the evolution of plant reproductive systems in 2001. She moved to the University of British Columbia in 2008 and began a post-doctoral fellowship with Loren Rieseberg and Sally Otto investigating evolution in invasive plants. In 2011 she became a Research Associate and bioinformatician on the AdapTree project investigating the genetic basis of local adaptation to climate in conifers. In January 2014 she became a lecturer at Monash University.

Kay has a diversity of research interests that generally focus on plant evolution in human altered environments. She is particularly interested in weedy and invasive plants and uses these species to investigate the genetic basis of rapid evolutionary change. Her research also includes adaptation to climate change, crop evolution as well as the evolution of plant sexual systems.